Not quite as exciting as the title would have you believe, Cliffhanger spars the main man Gabe Walker against the formidable foe of Qualan and his mates. Plot scenario: bank heist in aircraft goes wrong, plane crashes and you have to rescue the innocent while said bad coves search mountains for lost cash. Cliffhanger was also a film staring the ubiquitous Sylvester - and the lass from Northern Exposure.

Avoiding wild birds, mad dogs, mini-avalanches and falling rocks, you head high up into the peaks. Bags of cash litter the mountainous terrain and you need to pick up as many as possible.

Cunningly hidden beneath some rocks are a pair of hiking boots which are particularly useful for some of the crevices you have to bound across.

Your life force revolves around heat and if you stand around, Gabe starts to shiver. Why you get cold after being smashed by falling rocks is another matter all together. I'm sure that would give you a warm, stinging sensation.

No matter, scale some rapids, blow away Qualan's chopper and Bob's your Kendal Mint Cake.

The sad thing is, to keep warm you have to burn the bags of cash you pick up en route. Well, at least it stops the blaggards from getting the loot.

Cliffhanger is an abonimable game, though. It looks very poor, the control system is tricky and the chances are you'll finish it within a couple of days. So you won't have to play it again will you? Hurrah! 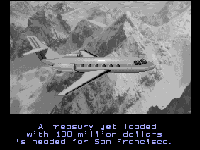 "Okay, here's the plot", explained the scriptwriter, Crispin Tarantula.
"The bad guys got the money and the chick, right? And the good guys gotta kill him, right?"
He leaned back in his chair amid warm applause. 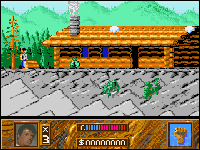 The art director, Wally C Mengeles, was next to speak. He cleared his throat nervously.
"I think we should set it in, uh, the mountains, where it's really cold," he said. "And the hero should wear a sleeveless jacket to show how, like, hard he is." 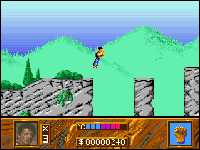 "Yeah", interrupted T Fall-guy, the stunt man. "If it's in the mountains we can have unfeasible jumps from rocky pinnacle to, er, rocky pinnacle." 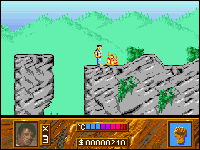 "If it's so cold in the mountains," said Crispin Tarantula, "Maybe we could have FIRES where the hero could get, like, warm." Everybody in the room went wild with excitement. 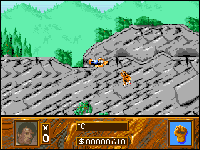 "I think it's really important that we have really poor collision detection and ludicrous animations," interjected T Fall-guy, "So that all the stunts look really crap." 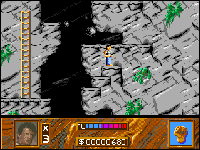 Cecily was next with a great idea. "Why don't we have a really annoying avalanche scene, where rocks fall randomly, and there's no way of avoiding them?" she chuckled. 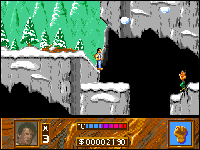 "And after that," she continued, warming to her theme, "we could have a slippy-slidey world, disguished as snowy mountains." 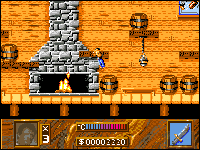 Wally was beginning to feel a little left out. "Why don't we have a cabin? he blurted. "A, er, log cabin like they have on mountains." 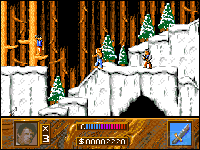 "...And forests," he went on excitedly. "Yeah, they have forests on mountains, don't they?" 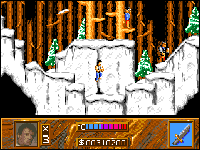 "That's right," drawled Crispin, "we could get some guys with guns hiding in the trees in the forest.
That'd be real cool." 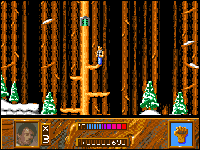 "And in a really stupid plot twist we could hide a huge sum of cash... up a TREE!"
Crispin was getting really carried away. His eyes were glazed and flocks of foam were appearing at the corners of his mouth. 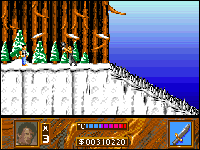 "Then we could have a big fight with a guy who has an unlimited supply of boulders that seem to appear from nowhere..." 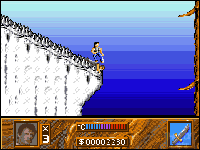 "...and when you've killed him, you could use his still bleeding corpse as a sleigh to get you over that spiky bit of ground that will kill you just by touching it, even though the guy you were fighting could happily walk all over it just moments before." 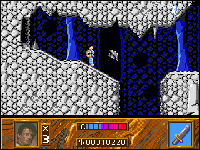 "Yes, yes, that's very good Crispin darling," said Cecily, "but in a game you need to change the mood every so often. What about an arbitrary underground scene with naff bats?" 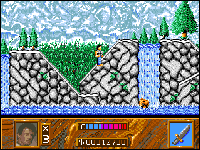 "And now for the final scene, the epic confrontation between good and evil, I suggest we get some water involved and how about one of those amusing jump-on-a-log scenarios that you haven't seen since Frogger. Then there's just the final battle to go."

Cecily paused for breath, looked round the room and gasped.
Everybody had died. Of boredom.