Elves are peaceful woodland dwelling folk who sit around singing songs, charming hobbits and discussing the virtues of honey flavoured biscuits, right? Wrong. Well, I guess they might be if they were given a chance, but when there is evil stalking the land, they tend to get a bit gnarly and go round whacking people over the head with big sticks – or at least they do in Heretic II.

But stuff the plot for now – if you really want to know about that, you can read about it below – the important questions that need answering here have more to do whether this conversion works properly, if it’s any fun and whether it’s worth buying. And the answer to all three questions is: "Yes"!

Heretic II is based on the Quake II engine, but is considerably different from that game. The most obvious difference is that this is a third-person shooter. Look at the pictures and you’ll see what I mean, you’ve always got this elf standing in front of you. His name is Corvus and he’s a bit of a mean feller – he’s very versatile and is capable of performing some pretty athletic manoeuvres.

Because the camera is behind your character, you might start thinking it’s all rather Tomb Raider-ish. It certainly looks that way, but it plays very differently. The emphasis here is on carnage rather than puzzle solving, and you have to aim to hit your foes.

The aiming business is a bit tricky at first. When you’ve been used to Doom and Quake, it takes a while to get used to having to compensate for the camera’s positioning. Don’t let it put you off though, you’ll making gory mess all over the place in no time.

CONTROLLING CORVUS
Starting the game is a real joy, because you get time to look about you and get used to the control system before things get really nasty. You can control Corvus in a number of different ways – you can use just the keyboard (if you’ve got five hands) or a combination of joystick and keyboard or mouse and keyboard.

The game supports PSX Port, so you can use a fancy controller too, though you’ll be hard pushed to have all the controls covered. I found the easiest thing to do is to have the mouse control where Corvus is looking using the left mouse button to fire, the right making him walk forward, and using the keyboard for everything else.

There’s a lot of controls to get used to what with jump, duck, look, creep, weapons etc. but it really doesn’t take long to memorise where everything is. There is a brief tutorial that explains all the basics very well, and then you enter the game, starting in the docks of Silverspring. As you wander about, you’ll hear the moans and screams of the citizens, and Corvus asks himself what on earth is going on. Now and again, you’ll hear the pointy-eared one make comments about what’s happening around him.

So within five seconds of playing you’ll know that Heretic II uses sound to excellent effect to build an atmosphere – when you meet your first bad guys, they make commetns about how they’d like to eat your liver – charming.

As you wander about Silverspring, you'll hear the moans and screams of the citizens and Corvus asks himself what's going on

There are other sound effects. Your footsteps change with different floor surfaces, and all the weapon noises are fantastic. And that’s just the sound.

Visually, the game is outstanding to, with meticulous attention to detail. The docks are full of barrels, coils of rope, flickering lights and mean little dwellings. Later on, there’s a castle where you find rich tapestries, crystal chandeliers and ornate vases.

The textures for the walls and floors are sharp and well designed, and some of the lighting effects are spectacular. If I had to criticise, I’d pick out the skies and externior scenes as being a bit of a let down – the skies look quite lo-res and lacking in colours, and the fogging in the marsh level only looks fine until you notice that objects appear as bright white silhouettes.

These are small points and in a lesser game you wouldn’t even pick them out, it’s just that I’m looking at them in the context of the rest of the game graphics, which are quite superb.

So what about the action? Heretic II plays very well. It boasts a good combination of defensive and offensive weapons, and enemies that are worth fighting. So far I’ve met zombies (two varieties – one armed with fireballs, the other with nasty looking hooks), normal rats, mutant rats, small dinosaurs, strange reptiles, froglike blokes (they shout "Landlubber!" at you), flying reptiles (really tricky to shoot), and some super zombies who lob gas bombs (they’ve probably all got proper names but as I haven’t seen any documentation, I’m making the names up). The enemies are varied, and quite vicious, especially when they gang up on you.

Like most games of this ilk, different breeds of bad guys can be persuaded to fight each other, which is fun. There is a violence setting where you can go from seeing nary a drop of blood to watching your foes explode in a cloud of flesh and vaporised guts. At one stage I smacked someone over the head in a doorway, and noticed that afterwards blood was dripping from the lintel. So keep the violence level down if you’re sensitive about such things.

SELECT YOUR WEAPON
I had problems identifying weapon names too. Most of the text in the game is in English, but the game options and names of the pickups are in German in the version I’ve been playing. Don’t worry, by the time you read this, a full English version will be available.

Corvus starts with his staff and a single fireball. The staff is actually one of the best weapons in the game for close quarters combat. Combine running with attacking and you can perform a very powerful spinning attack. The staff can also be used to pole vault over gaps, and can be powered up, so sneer not at that pole. The single fireball, on the other hand, is rubbish, and when you use it your offensive manna goes down.

There is also defensive manna, which you use to power defensive weapons. These included the Book of Power, which increase all of your weapon power, some meteors which home in and attack any enemies present and an egg spell which turns enemies into chickens. This is really imaginative stuff, it adds variety to a genre stuffed full of shotguns, chain guns and BF guns.

The level design starts off as a simple follow your nose to find the exit affair, but later it develops with more complex levels offering multiple routes and craftily hidden rooms. There are a few puzzle elements, where you have to find keys or objects, but they’re not overly taxing.

There’s certainly enough to keep you interested here for a good long while, and if the game sells as well as it deserves to, then mission packs will almost certainly become available. Credit is due to a number of teams for the development of Heretic II. Id Software created the Quake II engine, which provides the basis for fast polygon based blasters that has spawned several successful games. Raven Software adapted the engine to incorporate the imaginative fantasy elements and impressive textures, weapons and level designs. So three cheers all round.

Let’s not forget Hyperion, though, who have worked long and hard to get this working on the Amiga – a task many would have said was impossible. But they’ve done it and they’ve done it very well indeed. What’s more, now they’ve got the Quake II engine running, along with OpenGL (the software format that enables 3D acceleration) there’s scope for many more games on the Amiga.

There’s a catch with all this though. You need a serious amount of kit to run the game. First off this is a PPC (through WarpOS) only game. Hyperion did attempt a 68K version but found that, even on an overclocked ‘060, the game just wouldn’t run a reasonable speed. You’ll also need a decent 3D card supported by the latest version of Warp3D. The verge-based Cyber Vision card that we’ve got in the office was barely up to scratch, so Hyperion kindly lent us a Permidia 2 board, which was nice.

On top of all that you’ll be needing at least 64M RAM, and that’s barely enough. I have experienced problems with saving and loading games which I suspect is to do with memory consumption. This is something that Hyperion are hoping to address before fully releasing the game.

The other problems are really to be expected with a game of this complexity. There’s a tiny amount of skipping on some of the speech in the cut-scenes, and a small frame rate slow down when Corvus encounters an outdoor scene or a large number of enemies at one time.

If you can run this game, buy it. If you can’t, you should start thinking about whether you want to upgrade your machine – there are going to be more and more PPC 3D games coming up and believe me, you really do want to be playing them.

Power Computing are hoping to get Cyber Vision II boards in soon, while Eyetech already claim to have them in stock. It’s products like Heretic II that prove that the Amiga is still a force to be reckoned with. It’s up to you to prove the developers and suppliers that that’s what you want. 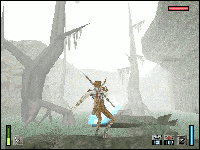